Plasmid-Lipid Nanoparticles: A Potent Tool for Manipulating Neuronal Genes In Vitro and In Vivo

Gene transfection in neuroscience has been limited due to the lack of an effective gene delivery tool. Recently, lipid nanoparticles (LNPs) have gained interest as safe and effective nucleic acid delivery vehicles both in vitro and in vivo. However, traditional methods for the manufacturing of LNPs pose numerous challenges such as operator variability, and poor scalability. Here, we describe the robust and reproducible manufacture of plasmid-LNPs using the scalable microfluidics-based NanoAssemblr? latform. The plasmid-LNPs achieve 95% transfection efficiency and high degrees of exogenous gene expression in difficult-to-transfect neurons in vitro and in vivo.

GFP plasmid was successfully encapsulated into LNPs using the NanoAssemblr? platform. The LNPs containing 3.5 kb and 8 kb plasmids were 90 nm and 100 nm in diameter respectively with identical PDI (~ 0.1). Plasmid encapsulation efficiencies > 95% were observed. Flow cytometry analysis after a 48 h treatment of 0.6 μg/mL GFP plasmid-LNP in rat primary neurons at DIV 7 showed > 95% uptake of nanoparticles (based on a fluorescent probe within the nanoparticle) leading to > 60% of cells expressing GFP. The high expression and uptake did not significantly impact cell viability even at doses of 2.5 μg/mL of GFP plasmid as measured using Presto Blue Cell Viability Assay. In vivo, GFP expression was observed 48 h following striatal injection of GFP plasmid LNPs in mice. Fluorescent markers for the LNPs and GFP fluorescence were found to colocalize in the striatum, and were found to spread to surrounding regions including parts of the ventricular system and corpus callosum.

Lipid Nanoparticles (LNPs) are a platform that can be used to deliver nucleic acids to cells. LNPs mimic low density lipoproteins (LDLs), which are taken up by an endogenous pathway. LNPs are pH sensitive, and designed to release their payload into the cytoplasm.

The NanoAssemblr? platform uses microfluidics to precisely control the manufacturing of nanoparticles from μL to mL scales.

Fluorescence micrographs of brain slices showing GFP expression (green) 48H following striatial injection of LNPs encpasulating plasmid DNA encoding GFP in of 10 month old, FVB mice. Injection of 5μl of a 3mg/mL GFP plasmid-LNP Formulation. Colocalization of nuclear staining with DAPI (blue), LNP uptake using DiD (red), and GFP expression (green) in the same image. Both LNP uptake and GFP expression co-localize within the area of injection, the striatium, and have spread to addtional surrounding regions including parts of of the ventricular system and the corpus callosum.

Flow cytometry analysis of GFP expression in rat primary neurons treated at DIV 7 with LNPs encapsulating plasmid DNA encoding GFP. At the highest dosage (0.6ug/mL), > 60% of the neurons expressed GFP. Both percent GFP positive and intensity of GFP expression (Mean Fluoresce Intensity; MFI) are titratable by dosage of the GFP plasmid-LNP. Flow cytometry was performed after 48 h of treatment in the presence of 1 μg/mL of ApoE. 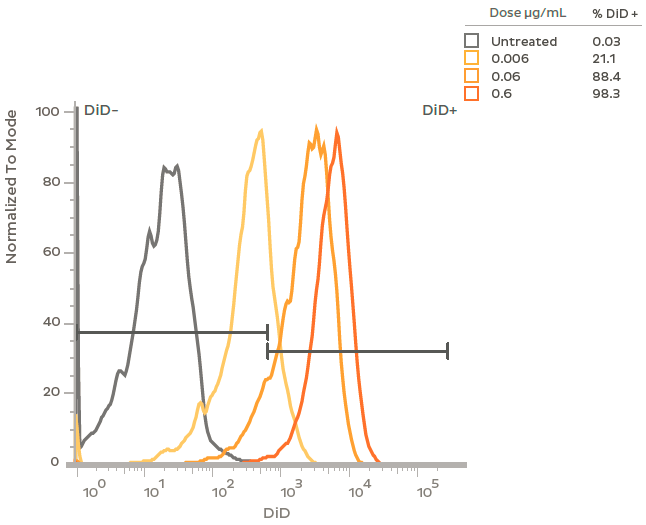 Flow cytometry analysis of plasmid LNP uptake in rat primary neurons. Cells were treated at DIV 7 with LNPs containing plasmid DNA and the fluorescent dye DiD. At a dose of 0.6 μg/mL plasmid > 95% of neurons showed uptake of LNPs and > 85% uptake at a one tenth that dose (0.06 μg/mL). Flow cytometry was performed after 48 h treatment with GFP plasmid-LNP in the presence of 1 μg/mL ApoE. 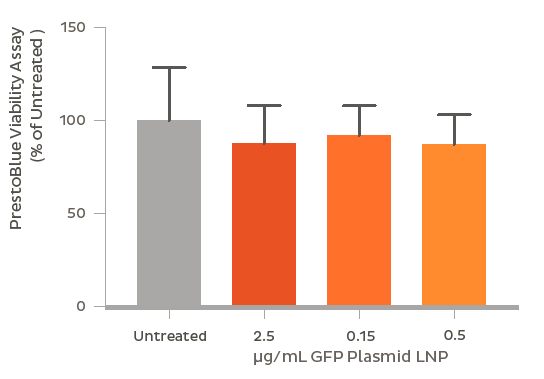 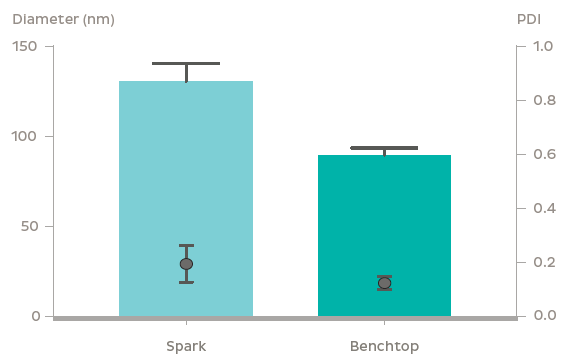 Primary Rat Cortical Neuron Culture: E18 rat cortical tissue (BrainBits, LLC) were removed from shipping media and trypsinzed with 0.25% trypsin-EDTA (ThermoFisher). Trypsin-EDA was inactivated by washing with 10% FBS in DMEM (ThermoFisher), then DMEM alone. The tissue was triturated in Neuronal Media (NeuroCult? Neuronal Basal Medium with NeuroCult? SM1 Neuronal supplement, and L-Glutamine (StemCell)) supplemented with L-Glutamic Acid (Sigma), and then passed through a 40μm cell strainer to form single cell suspension. Suspension was counted, and plated on PDL coated culture plates or glass cover slips at a density of 4.8 x 104 cells/cm2. Half of the media was changed with Neuronal media without L-Glutamic Acid every 3-4 days. Treatment of Primary Rat Cortical Neurons with LNPs: After 7 days in culture (DIV7), 5μg/mL of ApoE was added followed by specified LNP at the specified dose. Neurons were incubated for 48h then harvested for endpoint assessment. Flow Cytometry: Following treatment and incubation with specified LNP neurons were washed with PBS and then trypsinized with 0.25% trypsin-EDTA to detach them from the culture plate. Trypsinization was inactivated by 3% FBS in PBS and the neurons were triturated to form a single cell suspension. Neurons were then pelleted and washed with PBS before being re-suspended in suspension buffer (BD Biosciences) and Propidium Iodine (BD Biosciences) was added to stain for apoptotic cells. Suspended, stained neurons were passed through a 35μm cell strainer, then assessed using a BD Celesta Flow Cytometer. Viability Assay: The standard protocol included with the PrestoBlue? Cell Viability Reagent (ThermoFisher), following the manufacture’s instructions. Values were corrected to wells containing media without neurons. Immunocytochemistry: Neurons were plated on PDL coated coverslips, following cultivation, treatment and incubation, neurons were washed with PBS and fixed with 4% PFA. Neurons were permeabilized using 0.1% triton-X and then

blocked with NDS followed by incubation with a MAP2 antibody (Sigma M4403) for 1 hour, then blocked in NGS followed by incubation with a GFP antibody (AbCam ab13970) in NGS overnight. Secondary  ntibodies were then added; AlexaFluor-594 for MAP2 and AlexaFluor-488 for GFP. Coverslips were mounted on glass slides using ProLong? Diamond Antifade Mountant (Thermofisher) and imaged on a confocal microscope. Confirmation of the selective binding of the primary and secondary antibodies was provided through no primary controls (data not shown). RNA Extraction and RT-qPCR: Following treatment and incubation of the neu rons, RNA was extracted using PureLink? RNA Mini Kit (ThermoFisher) following the manufacture’s instructions. RNA concentrations were assessed using a NanoDrop (ThermoFisher) and then equal amounts of RNA were used for cDNA conversion using the SuperScript IV VILO Master Mix (ThermoFisher) and following the manufacture’s instructions. RT-qPCR was performed using TaqMan primers and probes against the targeted mRNA and ActB (IDT Technologies), and iTaq Universal Probes Supermix (BioRad), run on a thermocycler (BioRad, CFX96) triplicate wells per biological replicate were used. Expression values of targeted mRNA were normalized to ActB values using the ??Ct method. In Vivo Plasmid Transfection: YAC128xNSG mice at 5 months of age were intercranially injected with LNP-encapsulating plasmid encoding a protein with an eGFP reporter. Mice were anesthetized with 1% isofluorane. The heads were prepped and a single craniotomy was made +0.5mm anterior and -1.75mm lateral to bregma. A Hamilton syringe was loaded with 5 μl of plasmid-LNP and lowered -2.5mm from the dura. 5 μl of plasmid-LNP was injected at a rate of 0.5 μl/minute. Needle was left in place for 5 min before being retracted over course of 3 minutes. Skull was sealed with bone wax and sutured. Mice were observed for recovery until ambulatory. 48 hrs following injection mice were intercardially perfused with PBS and formalin. Brains were extracted and cryopreserved in 30% sucrose before flash frozen in isopropanol. Brains were sectioned using a cryostat at 30 μm thick serial sections with every 6th section

being collected for analysis. Brains were mounted and cross-labeled with Hoescht (1:1000) for 15 min. Slices were imaged (Keyence BZ-9000) at 4x and stitched together using Keyence Viewing Software.

Nuohai Life Science co., Limited is committed to equipping scientists in life science field with advanced experimental and research & manufactural equipments, related consumables, reagents as well as offering professional application and technical support services. We aim to constantly promote the development of new technology in life science field with the timely introduction of the latest foreign technology and products. Meanwhile, Nuohai Life Science provide CRO and CMO service to acdamic and industrial customers, to satisfy every demand in the R&D and manufacturing.

Nuohai Life Science was established in 2004 with headquarter in Shanghai and 8 offices in Beijing, Guangzhou, Chengdu and other first-tier cities, providing a nationwide selling & service networking. Customer service is just a call away.